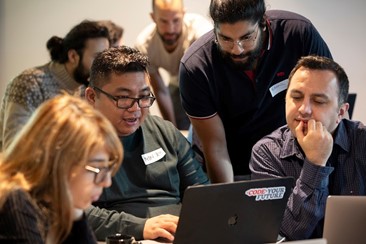 The main purpose of the charity is to support refugees, asylum seekers and people from other  disadvantaged groups with free coding training. Code Your Future equips these individuals with the skills necessary to start a new career as junior web developers.

The idea behind Code Your Future came about during the Summer of 2016. German Bencci worked in the tech industry and wanted to find away to create a positive impact in people’s lives through technology.

During his time working in the industry, he had met many founders of tech companies across Europe and noticed how valuable developers were for organisations of any size. At the same time, the European refugee crisis of 2015 had left the UK with a negative view of forcibly displaced people.

Seeking inspiration, German reached out to the founder of Hack Your Future , Manon Brulard. Manon then became a guide through the early stages of the process of setting up Code Your Future.

In mid-October 2016, Code Your Future had its first class with ten students from Syria, Afghanistan, India, Ethiopia, setting the foundations of the London chapter. Shortly after CYF grew with hubs in Scotland, Manchester, Birmingham and in Rome.

The UK CYF Community in numbers

Code Your Future have created a unique, learning community that helps people to find and succeed in meaningful jobs in tech.

They help by offering free and flexible courses to passionate and committed people. People who have come from more difficult backgrounds, and who would otherwise not have had access to boot camps or other training opportunities, no matter their experience.

The team is very much looking forward to working in partnership with this remarkable charity in the year ahead!